inversions & deceptions
in an æegalitarianÆ culture 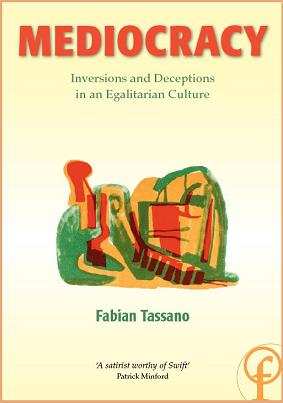 2 the triumph of style over substance

The emperor has no clothes ...

Why do some areas of culture seem to be dumbing down, while others are increasingly incomprehensible? Why is so much emphasis given to presentation, while the underlying substance often seems muddled or vacuous? Fabian Tassano argues these things are symptoms of æmediocracyÆ, a new model of society in which content is sacrificed in favour of appearance and ideological correctness.

Mediocracy takes a satirical tour of contemporary culture, revealing how our arts and universities suffer from the same diseases as our politics Ś dishonesty and pretentiousness. Tassano shows how egalitarianism and postmodernism have debased concepts such as æphilosophyÆ and æcreativityÆ to the point of parody.


æDelightfully dissects the language of modern egalitarianism and political correctness. Witty, biting and definitely not to be read by New Labour.Æ
Professor Patrick Minford
æRead this book and gain important insights into the way that the cultural eliteÆs language works to disorient public debate.Æ
Professor Frank Furedi


Other books published by OXFORD FORUM

mediocracy on the web